These red velvet brownies are my new obsession and of course are another pinterest find! I've posted the recipe below, but I actually altered the original recipe that called for 2ounces of red food coloring and I only used 1/2 an ounce when I made them.  These brownies were still very red- just with a little less artificial coloring.  Red velvet a slightly more natural way? 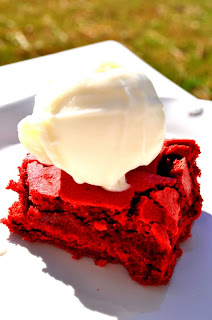 To make the brownies:
Preheat the oven to 350 degrees F.  Butter and flour an 8″x8″ baking pan.
In a small bowl, slowly stir together the cocoa powder, food coloring, and 1 tsp vanilla into a thick paste. Set aside.
In the bowl ,beat together the butter and sugar on medium speed until light and fluffy, about 2 minutes.  Add eggs one at a time, mixing well after each addition, then stir in the remaining 1 tsp of vanilla. Add in the cocoa mixture and beat the two mixtures together until they are one uniform color.  Slowly add in the flour and salt and mix on medium-low speed, just until combined.  Do not overmix.
Remove the bowl from the mixer and stir up the batter with a rubber spatula once or twice just to ensure all of the flour has incorporated from the sides of the bowl and there isn’t anything stuck on the bottom of the bowl.  You’ll want one uniformly colored (red) batter.
Pour the batter into the prepared pan and bake for 30-40 minutes or until a toothpick comes out clean when inserted into the center of the brownies.  Allow brownies to completely cool in the pan on a baking rack, about 45-60 minutes.

You can either top these with cream cheese icing, icecream or both!
Posted by Morgan Corbett Labels: barn, wedding, teach, cupcakes and cakes eat cake at 2:58 PM